Report of the 2-week visit of Charleston, South Carolina USA 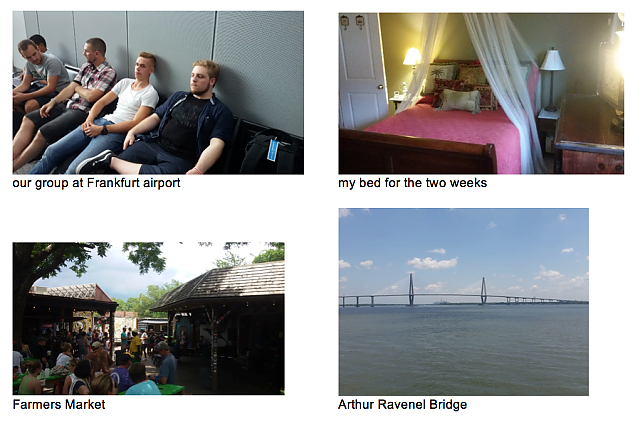 Saturday, 9th June: We started our trip to South Carolina from Frankfurt airport. After a 9-hour flight and a short layover in Charlotte, we arrived at the Charleston airport where our host families picked us up and drove us to their homes. I stayed with the wonderful couple Suzanne Joiner and her husband Kevin Brown in a nice suburb of Charleston. We had dinner together at their house and after that we had fun packing out my guest presents.

Sunday, 10th June: My host family and I spent the day together. They showed me how they live and what Charleston looks like.

Monday, 11th June: Our group of four students and our teacher met in the morning at the Trident Technical College where we were welcomed by the staff of the Trident Technical College. After that we got a tour of the college with all its different departments and the campus. Next, we had a quick lunch and then we got to be part of a lesson in digital marketing at the college.

Tuesday, 12th June: The teacher and us four students had a lesson in macroeconomics. Afterwards our group had a meeting with the President of TTC. We introduced ourselves and had the opportunity to ask questions about the college. Dr. Mary Thornley the president of TTC gave us her vision and her plans for the college in future and told us what part TTC is taking within the education system of the US. 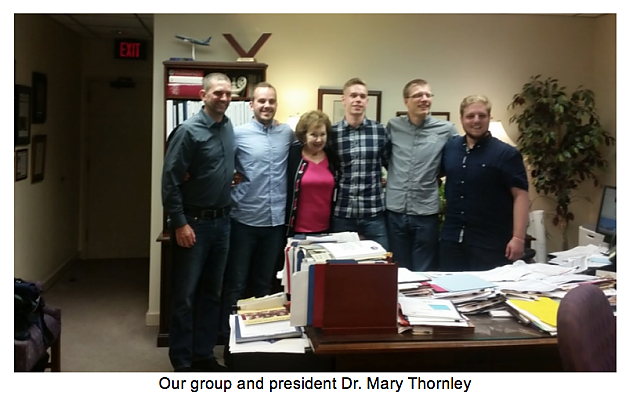 Wednesday, 13th June: An instructor of the College gave us a lesson in information technology focusing on security issues and accounting. I enjoyed the lesson, she showed us how easy it is to locate where you took a photo with your phone.
In the afternoon we visited Magnolia Plantation which gave us a great insight into the history of South Carolina.
On this day our principal Wolfgang Stutzman arrived and joined us for all activities during the next two days.

Thursday, 14th June: We visited the Aquarium of Charleston, where we got a private tour through the building and the backstage of the Aquarium. After the tour the business team gave us an overview of their business model and how the attraction has been performing since it first opened its doors to the public. They told us about their problems and how they intend to solve them in future. We had a great lunch at a deli in Downtown Charleston and afterwards we visited a nice colonial house in the best area of the city at the seaside. In the evening our group went to a Baseball game of the local team Charleston Riverdogs. The business team of the Riverdogs showed us the arena and we were invited to watch the game. 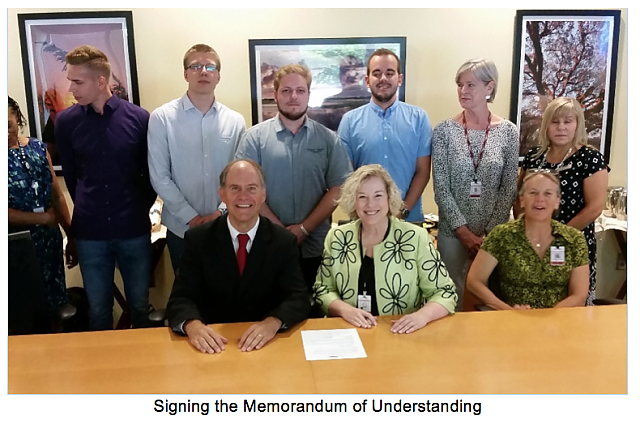 Friday, 15th June: On this day we visited The Charleston Chamber of Commerce. The Chamber is located in a brand-new building in the industrial area of Charleston. The vice president presented what the chamber’s role and the tasks it performs, then we compared the chamber with our chamber of commerce (Industrie und Handelskammer) in Germany. He also presented the economic forecast for the Charleston County and other projects of the chamber the perform in cooperation with the city of Charleston to solve e.g. traffic issues within the county.

In the afternoon our principal Mr. Stutzmann and our teacher Mr. Obst presented our school and its activities as well as the dual education system in Germany. Furthermore, us students were able to contribute in a round table discussion by relating about our individual experiences with the German dual education system.

After this successful exchange of information, Vice President for Academic Affairs Dr. Cathy Almquist from TTC and Mr. Stutzmann from BBS W1 in Ludwigshafen signed a Memorandum of Understanding between the two colleges in which it was agreed to have long-term exchange in future.

In the evening the German teachers invited all the host families, staff members involved in the exchange and us students to celebrate the successful signing ceremony during dinner at the renowned Halls Chop House in downtown Charleston. Needless to say, we had a magnificent dinner, there.

Saturday, 16th June: Leisure time – our group visited the beach for the whole day. We had a lot of fun and enjoyed the sun.

Sunday, 17th June: We stayed with our host families. It was Father´s Day, so we celebrated that with a BBQ party and games at their house. 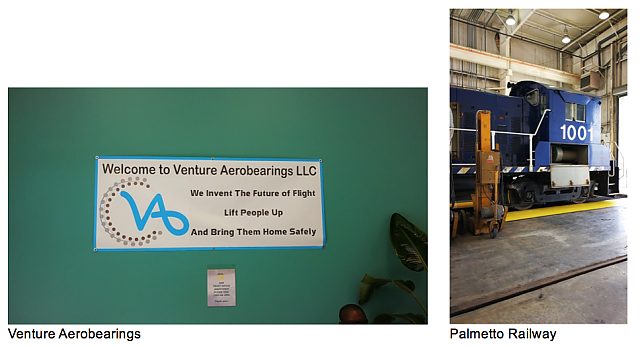 Monday, 18th June: The Day was all about turbochargers. First we visited Cummins Turbo Technologies; they manufacture turbo chargers for diesel engines. They showed us how a turbo charger works and how important a turbo charger is to save fuel. Next our guide gave us a tour of factory. After a quick lunch we visited a supplier of Cummins. VTL Precision manufactures the power regulators for the turbo chargers. The design manager showed us how the robots cut the metal to perfection and how their supply chain works.
In the evening us four exchange students presented the dual education system to the Leadership Cabinet of the Trident Technical College, to give them an overview of how our education is organized in Germany.

Tuesday 19th June: Our group went to Venture Aerobearings a supplier that produces engine parts for Boeing. The company is 99% Boeing-owned, so Boeing is their only customer. They showed us the business model, how they were founded and why they were founded.
After a tour around the factory and lunch we went to Palmetto Railway in downtown Charleston. The company is the only railway provider in Charleston and owns all railway tracks in Charleston. The CEO told us about the importance of the railway tracks and how the railway will provide one central solution to Charleston’s traffic problems in future.

Wednesday, 20th June: Synter Resource Group was the first company where we were able to help in their working process. They implemented us into their service department where we made customer calls and created invoices for road transports. The company is a service provider to which logistic companies can outsource their invoice and accounting management. In the evening we enjoyed a guided ghost tour around downtown Charleston. He told us a lot about the slave history of Charleston and how the city became famous during the civil war. He also showed us the theater of Charleston which is over 300 years old

Thursday, 21th June: Due to the location of Charleston the port is very important for the city and the region, which we visited that day. The port is the second biggest port in South Carolina. The port manager drove us around the container yard and told us about the history and the role of the port in South Carolina. In the evening our host families and us four exchange students went to Patriot Point were an aircraft carrier is located. From there we took a ship for a farewell dinner and a tour around the Charleston waterways. This was one of the best evenings I ever had in my lifetime. It was so much fun and the food was perfect. 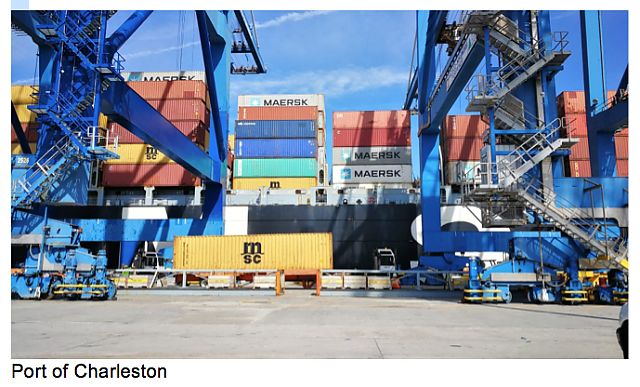 Friday, 22th June: We met at Trident Technical College for a Wrap-up session. The instructors asked us questions about the exchange program and how they could improve the stay for the next exchange program group. We also gave them suggestions for their students who want to visit Germany. Afterwards my host family and I went to the beach for the last time, we had deep-fried shrimps. They were so good.

Saturday, 23rd June: Our group met at a restaurant to have our last meal in the US before we flew back to Frankfurt.

My personal conclusion:
I had two wonderful weeks in South Carolina which I will never forget. My host family treated me like their own son. We are still in contact via Whatsapp. I really want to thank everyone at this point for making the exchange program possible, my English improved so strongly and I feel more confident talking English. I also learned a lot about the US citizens, about how they live and about the history of the USA. For me personally, I made a huge step into being more mature and being more self-confident. I hope this exchange project will continue in future. This would be a great step to bring Rhineland-Palatinate and South Carolina closer together.